his week’s summaries we looked at the time period between o BCE and 1450 AC and focused in on (books, printing, writing and how they were affected by various factors. These factors include the paper they used and they used and why they chose it and to their purpose, mostly commissions of religious texts. Examples of these texts include the 1st printed text The Diamond Sutra, The Codex of Gigas, and The Book of Kells. The overwhelming majority of these works are religious in nature, and we saw the influence that religion had on the stylistic choices of these texts.For example, we looked at illuminated Manuscripts of the Quran which were devoid of any representations of humans. Christian and other religious illuminated texts often featured humans as the main subjects of illustrations which made an interesting contrast. This was because in Islam the representation of the human form is not allowed in any shape or form as it is considered a form of idolatry. From this, my group which focused on architecture began to began to think about how religion affected architectural styles, which prompted many questions.

Flamboyant style is an ornate form of Gothic architecture which evolved from the Rayonnant style, and flourished in French between 1350 and 15,00. The west facade of the Cathedral of Rouen built in 1370 is considered the birth of the style, the high point of Flamboyant architecture is the church of Saint Maclou at Rouen (as shown below).

France is the homeplace of the style however it was adopted by Spain and Portugal in the 15th century. La Capilla del Condestable in Burgos, and the Cathedral of Segovia in Spain serve as prime examples of the Spanish form of the Flamboyant style.

In essence, it was a purely decorative style which added embellishments onto the foundation of Gothic architecture(such as flying buttresses and valued ceilings) but no structural Advances.

The most common descriptors attributed to the style are “flowery” and “lacy” which are both apt adjectives for it. Every surface was taken advantage of and used for decorative purposes. Facades in particular were the jewel of the style. They were painstakingly carved, and created

These elements compounded created an almost delicate appearance which was only accentuated by some of the structural choices integral to the style. The foundations of the buildings in flamboyant style are noted to be proportionally very thin, allowing for  little space in between windows, roof lines and flying buttresses.

However perhaps the most recognizable aspect of the Flamboyant style are the stone window traceries ( the stone work which provided reinforcement between glass segments). Unlike many other variants of Gothic architecture, Flamboyant traceries are recognized by their distinct “s” shape compared to the more common round traceries of other Gothic styles. The traceries are often compared to flames or tongues. 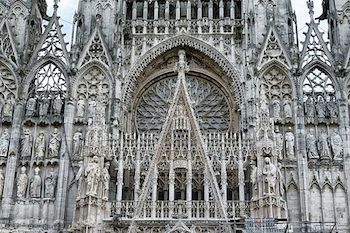 Niches which featured figures were also common in Flamboyant architecture although it was common spread thoroughly all Gothic architecture.