Sure It’s Shiny…But was it worth it? The Crystal Palace vs. the MLC Crystal, Survey 5

On the heels of the industrial revolution, the amount of product and merchandise was at a monumental height. All over the world, people were producing consumer goods. India was prolific for it’s printed luxury fabric and rugs, while Japan was fresh on the scene with Ukio-e prints and obsession-inspiring accessories. Today, we have museums to exhibit interesting worldly items like these.

Prince Albert, husband to Queen Victoria, decided that the rest of London should be able to experience the phenomenon that was worldly culture. It was the first World’s Fair of 1851, titled “Great Exhibition of the Works of Industry of All Nations” that gave cause to the construction of one of the most extraordinary buildings of the Victorian era.

The Crystal Palace was designed to house the World Expo, starting construction in 1850. It was designed by Sir Joseph Paxton, a resident greenhouse builder.The building was an odd combination of iron and glass. Brittanica .com states the staggering dimensions of the building, citing;

” It consisted of an intricate network of slender iron rods sustaining walls of clear glass. The main body of the building was 1,848 feet (563 metres) long and 408 feet (124 metres) wide; the height of the central transept was 108 feet (33 metres). The construction occupied some 18 acres (7 hectares) on the ground, while its total floor area was about 990,000 square feet (92,000 square metres, or about 23 acres [9 hectares]). On the ground floor and galleries there were more than 8 miles (13 km) of display tables.” A full view of the Crystal Palace after being moved to Sydenham.

To give you an idea, the Palace of Versailles covers a total area of 63,154 m2, while the Crystal Palace covers a whopping 92000. The glass was chosen to due Paxton’s background with greenhouses, and the lifting of the glass tax a few years prior allowed the 300 000 large sheets (fabricated in the largest size ever made) to be obtained easily and at a much lower cost. The total cost of the building was approximately 2 million euros, which in today’s cost would Blueprints for the Front arch of the Crystal Palace.

The building process was as follows (as per http://www.vam.ac.uk): An arial drawing of the Crystal Palace by Charles Burton

After years of glorious shows and exhibitions, the Crystal palace was brought down by a number of forces. November 30th, 1936, 85 years after the vision of the World Exposition came to life, The Crystal Palace was destroyed by a fire. The majority of the Palace was completely ruined, and shortly after all that remained was again ruined by war explosives (1941). All the money and hard work proved obsolete: the cost of reconstruction was deemed unrealistic during wartimes and it was never rebuilt.

A modern day equivalent of this architectural, gem-like masterpiece could be hard to find. The Louvre is a similar structure, but was done similar to the time of the Crystal Palace. Canada holds a unique gem in the world of museum architecture; and I mean that quite literally. 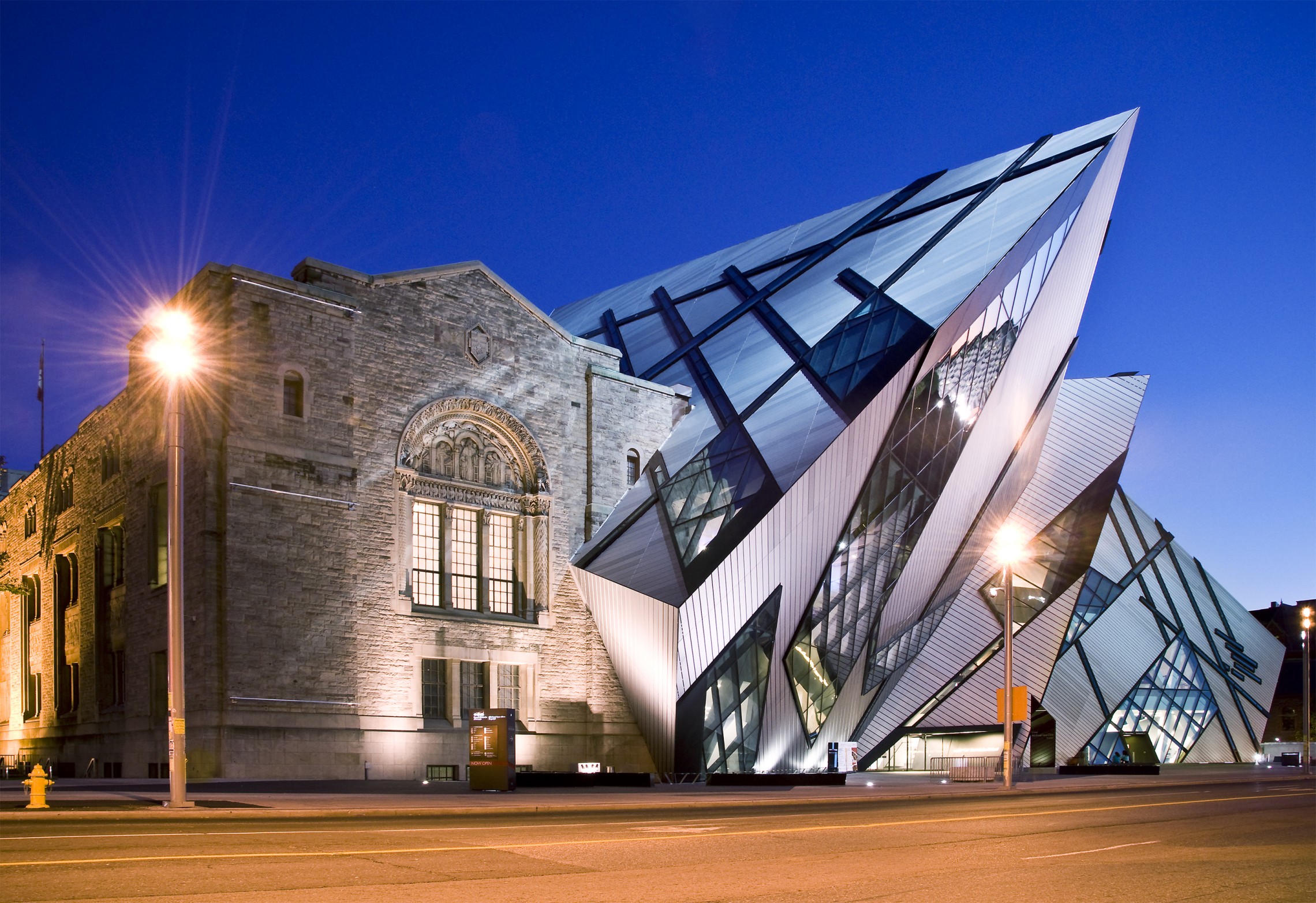 The traditional building next to the new Crystal addition, added and completed in 2007.

The Royal Ontario Museum is home to the Michael Lee-Chin Crystal, an architectural and visual marvel. Inspired by it’s namesakes natural gem collection, the Crystal Palace and the M.L.C Crystal share many similar qualities in that respect.

The Royal Ontario Museum speaks on it’s new addition (added in 2007), highlighting what a feat it was to create. On their website, they state:

“Considered to be one of the most challenging construction projects in North America for its engineering complexity and innovative methods, the Lee-Chin Crystal is composed of five interlocking, self-supporting prismatic structures that co-exist but are not attached to the original ROM building, except for the bridges that link them… The original concept art of the Crystal, done on a napkin.

The exterior is 25% glass and 75% extruded-brushed, aluminum-cladding strips in a warm silver colour. The steel beams, each unique in its design and manufacture and ranging from 1 to 25 metres in length, were lifted one by one to their specific angle, creating complicated angle joints, sloped walls, and gallery ceilings. Approximately 3,500 tons of steel and 38 tons of bolts were used to create the skeleton, and roughly 9,000 cubic metres of concrete were poured.”

The biggest difference between the two, besides the obvious juxtaposing forms, would be the materials. The Crystal palace was composed almost entirely of glass and iron, while the M.L.C. Crystal features aluminum and steel. 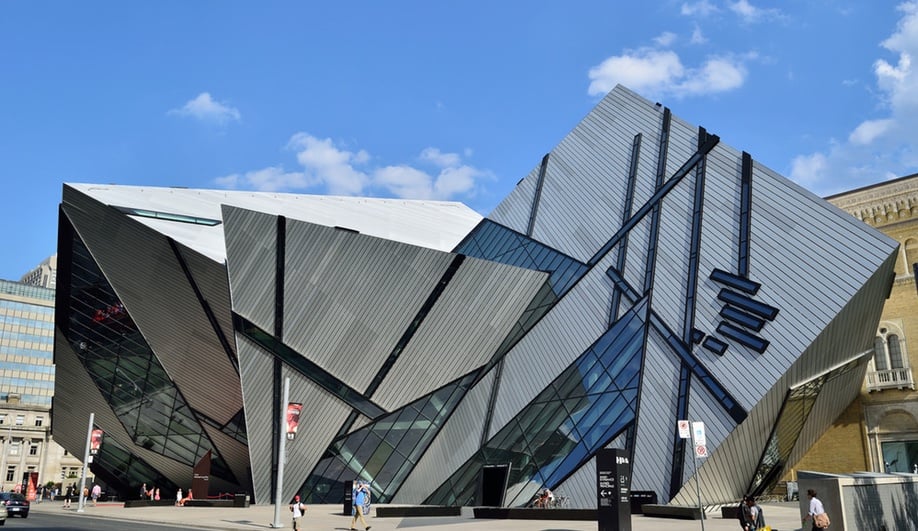 A full view of the Crystal.

However, the success that the Crystal Palace experienced was not shared by the M.L.C. Crystal. People hate this thing.  “Revisiting Canada’s Most Hated Building,” “The Crystal Not Necessarily an Attraction,” and my personal favourite, “Toronto Still Not sure if it Likes the Crystal Or Not,” were just a few of the titles that came up with a quick google search. The Crystal Palace was a massive success; people viewed it as a marvel of it’s time and as a beautiful addition to London. The MLC Crystal, although modern and innovative and just as much of an architectural marvel is widely disliked. Some even want it taken down completely. The $30 million addition might not be worth it in the eyes of the public after all, perhaps they would have preferred the Victorian Crystal Palace instead of their own.

This week’s lecture covered many things, but the one that stood out to me the most was the first world fair, better known as the Great Exposition. The Crystal Palace was created with the sole purpose of housing the World Fair, and I find it appalling that such a beautiful and intensive structure was taken down multiple times. Yes, I understand that it was a bomb threat, but still. Also, a worlds fair! How cool! The middle class world for the first time was able to see what living elsewhere was like, and I can only imagine the art that came out of Europe after this event. Imagine being in London, creating your traditional art, and then seeing all of this mind blowing shit all in one room. Crazy. I love lectures even more the more we progress through the years, because we get to see photos of people living their lives! It’s so much easier to grasp the information and empathize now that we have real images of people and what they were experiencing.