Bad Bitches of the 20th Century: The Suffragettes of Canada, Survey 6

Women’s suffrage in Canada was a long fought battle that yielded little results for many years. Suffragettes of the time had many issues to tackle, the first of which was the need to become “people” (a problem that wouldn’t be addressed until the later date of 1929). Full citizenship was granted to men in the mid-19th century, but explicitly excluded female voters. Like I said, women had many a battle to tackle, but they decided to start with the issue of voting, to give them a platform to influence social reform. By the end of the 19th century it was clear that there were several layers of social reform that needed to occur internationally pertaining to female treatment and their position in society.

“Suffragists were not a homogeneous group; nor did they focus only on suffrage. Campaigns also called for improved public health, equality in employment and education, social assistance and condemnation of violence.”

Suffrage in Western Canada began in the 1880s. Victoria, BC, served as a social hub for the suffragette movement. Protesting would occur often; women were not ashamed to voice their opinions. They were nothing short of desperate to. Due to the lack of definition of women as peoples, women faced discrimination in every avenue they were allowed into. Crimes against women were seldom followed through with, and violence against a women in the home was not made illegal until 1983 by the Canadian government. The issue of abuse was one of the primary driving factors for Suffragettes in America and Canada alike. To be blunt, women were tired of being beaten, raped, and abused, and wanted to do something about it as quickly and as effectively as possible.

“Since the earliest years of the province’s history it had been widely believed that women’s roles in society should be limited to the domestic sphere. Women did work outside of the home, often out of economic necessity, but many faced low wages, poor working conditions and even violence. In addition to discrimination in education, women were considered by many to be less rational than men and of a different temperament – excuses often given to justify their exclusion from voting and public life.”

The turn of the century experienced rage like Canada had never seen before. After a House of Commons ruling in 1885 that defined voting as only available to white male citizen Canadian minorities pushed even further to be heard.

Young University students were the first among this group to lead the newly fuelled protests going into the 1900’s, and walked behind the support of Woman’s Christian Temperance Union, one of the largest women’s groups in Canada, as well as one of the largest advocates for the suffrage movement. Additionally, figures in Central Canada spear-headed their own movements, like journalist Nellie McLung.  The Canadian Encyclopedia describes McLung as  “The Prairie movement’s dominant figure.” Her literature helped perpetuate support for the suffrage movement by shunning anti-feminists. McLung also participated in a Satirical mock-parliament piece (alongside  A.V. Thomas, F.J. Dixon, Amelia Burritt, Dr. Mary Crawford) in which they debated whether to give men the vote. Women separately found support in the farming, labour, and social gospel movements. 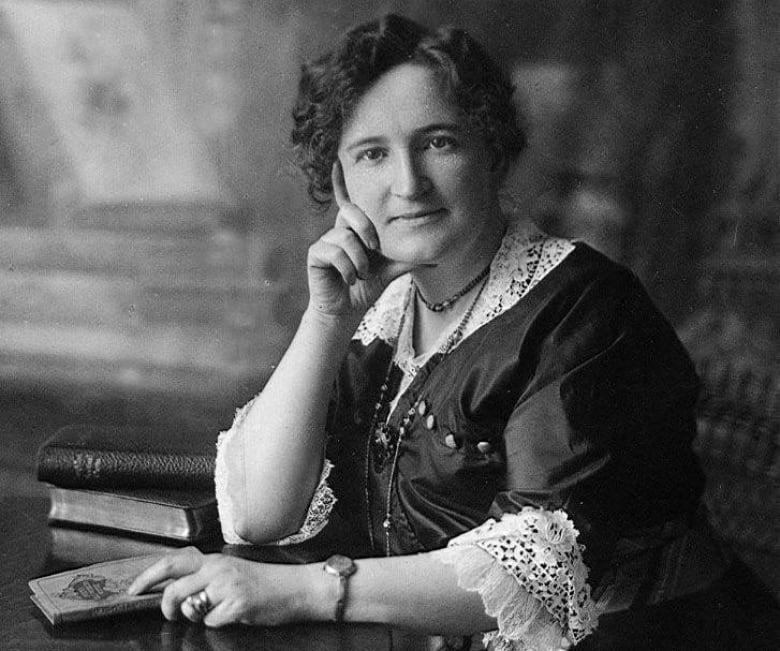 The Women of the Satirical piece: “Political Equality League Presents Petition, 1915,” that debated over the right of men in the voting sphere.

January 16th, 1916, Manitoba is the first province to grant women the right to vote. Although viewed as a monumental success, it was still 16 years after the suffragette movement began. Saskatchewan followed suit and passed the women’s vote in 1916 under a liberal government. As for our lovely British Columbia, the Canadian encyclopedia states that “British Columbia was the only jurisdiction in Canada to put women’s suffrage to a referendum of male voters, during the provincial election of 1916. Bolstered by the favourable results (43,619 to 18,604 ballots), the new Liberal government approved women’s suffrage on 5 April 1917.” A 1917 poster advocating for suffrage in the East, comparing the levels of successful areas of North America.

Women protesting in the Maritimes after women in Manitoba, Saskatchewan, and BC are given the right to vote.

1917 finally saw Ontario catch up to the West, and on May 24th of 1918 women were allowed to vote in federal elections. HOWEVER, all was not won. The law still restricted indigenous, Asian, younger than 21, and women without citizenship from voting. Quebec Women had to wait until the absurd date of April 25th, 1940 to finally partake in elections. Those excluded in the federal bill of women’s voting rights waited much longer than their white Canadian counterparts. It was not until the UDHR (Universal Declaration of Human Rights, created by John Humphries) introduced in 1948 that people of “foreign” heritages could vote. Lastly, indigenous women were still banned from voting until only 58 years ago in 1960.

This week we covered “Dreams and Designers,” and we covered the years 1895 to 1905. We spoke about Women’s suffrage, obviously, as well as the aftermath of the Victorian Era and the progression of the Art Nouveau movement. I personally was enthralled with the idea of art the pre-cursors to modern art. The movement of symbolism and the beginning of the “emotional artist” is something that resonates with me. Architecture is not something that I particularly take care to notice, but the period of art nouveau particularly caught my eye. The one domed red glass ceiling especially made me take interest!